At first glance, reading the entries feels voyeuristic. In practice, however, we look out in order to look in; by watching others and the specificity of their experiences, we may catch glimpses of ourselves. In early July, Lynch, Mahboubi, and Wu met me at the gallery to speak about the collection and what the erotic might be all about.When I arrive at Hearth Garage, the door is wide open and the exhibition on view is Written in Water, a group show about memory. Wu runs to the corner store for drinks, leaving Lynch, Mahboubi, and I to chat while we wait for Wu to return. The latter are two of four programmers at Hearth Garage and part of the team responsible for reading submissions, offering edits, and publishing “Erotic Awakenings.” The project was first developed by Wu as a live reading series curated by various artists and writers. The Hearth team always hoped to work with Wu, and out of this desire for collaboration, a public archive was born. The online format allows contributors to widen their approach to storytelling. Combing through the collection, which is now in its fourth volume, you will find prose, poetry, comics, and images. Always, we witness a series of private longings on display.

Rowan Lynch (RL): It’s nice to have a project on the go that can involve anyone. We’re casting a net and continuously inviting people to submit. [That approach] really works well for the premise, because it’s about these unique experiences, but it’s this experience that’s nearly universal. Hearing from a wide range of people is what makes it so interesting. Also, you don’t often hear casually about these sometimes-intense moments in people’s lives. As a collection, it’s inherently compelling.

MIM: Can we talk about the political side of eroticism?

FW: The displacement of text and body was really interesting.

MIM: Can we talk about anonymity? What is its function here?

RL: We want to give people the option [of anonymity], in case they’re talking about a certain part of their identity that isn’t public.

FW: It’s also an invitation for their full disclosure, for them to speak their story as it is with the protection of anonymity if they want it. The first version of this series was not anonymous. People were reading their own stories live. But I think because this exists as an archive online, and it’s all written down, there’s a different sensitivity to that. It’s less of an event, and more of a publication.

MIM: At the virtual launch for Volume 3, Fan described the writings as hybrids of diary entries and conventional literary forms such as essays or poems. The writings merge the public and the private domains. What happens when the boundaries between private and public spaces coalesce?

Sameen Mahboubi (SM): I think it creates an open environment. I’ve left those events feeling receptive and open. I’ve heard very intimate details and stories from people’s lives that I wouldn’t have had the privilege to hear otherwise, and that feels very special.

RL: There is definitely a voyeuristic interest in reading them.

MIM: Let’s talk about voyeurism. Here, it’s consensual, obviously. The contributors submit of their own volition, so they’re willing to be seen even if under a pseudonym. Why do you think we like to see it?

RL: I think it has to do with how their stories are relatable, but also unrelatable. People are motivated in very similar ways, but the way that motivation actually manifests is so different.

SM: Every sexual experience is so unique in such a strange way. 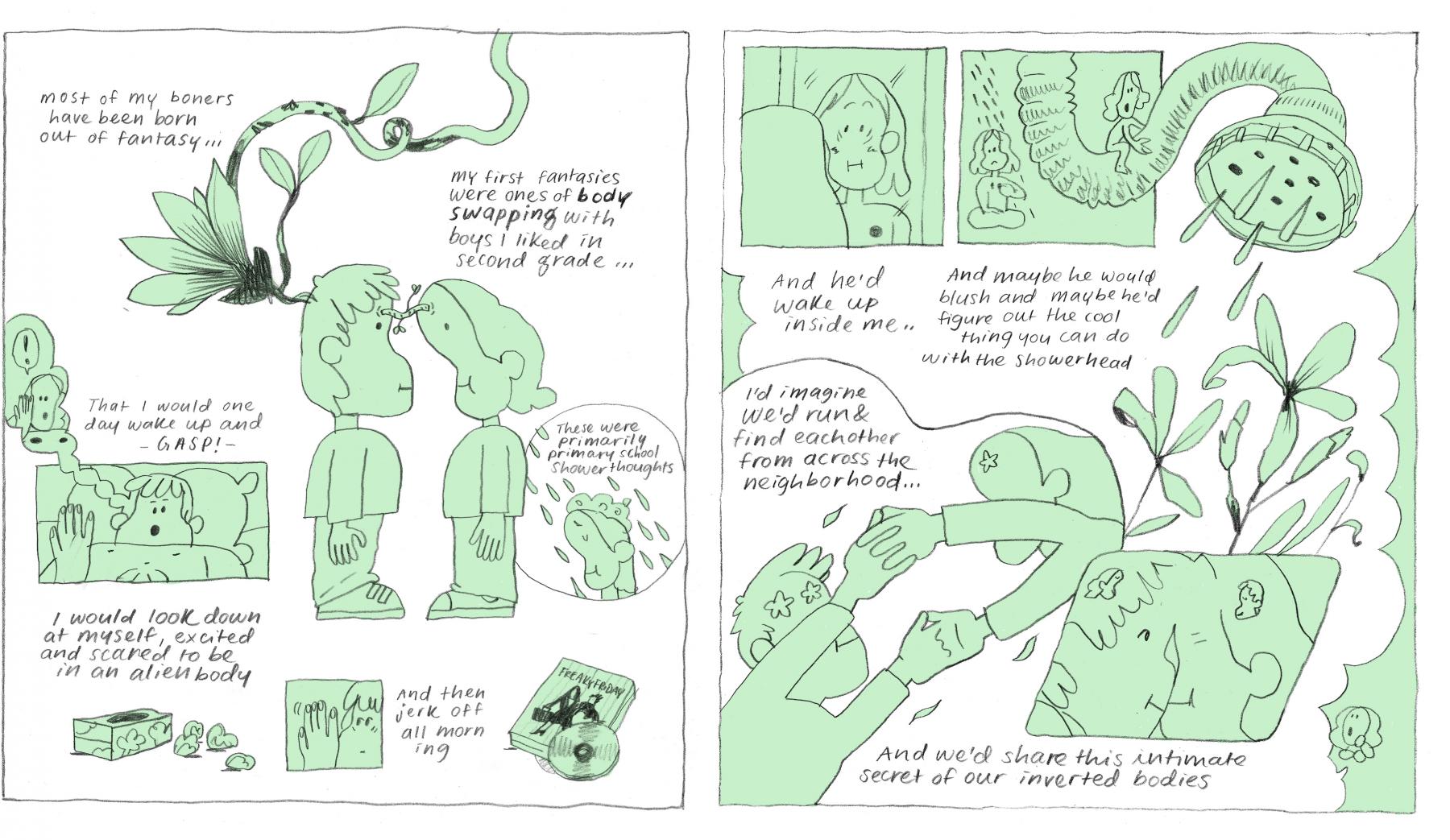 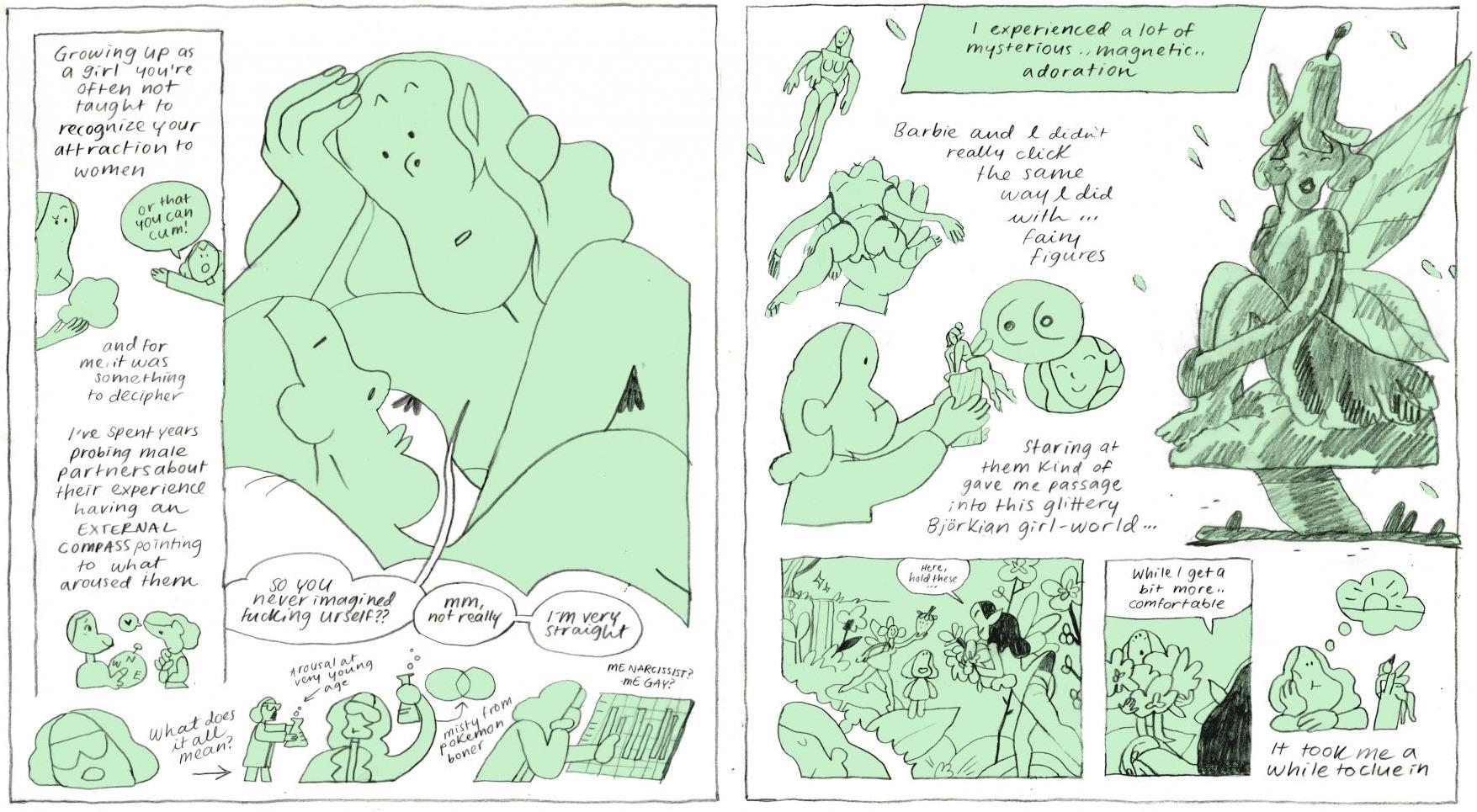 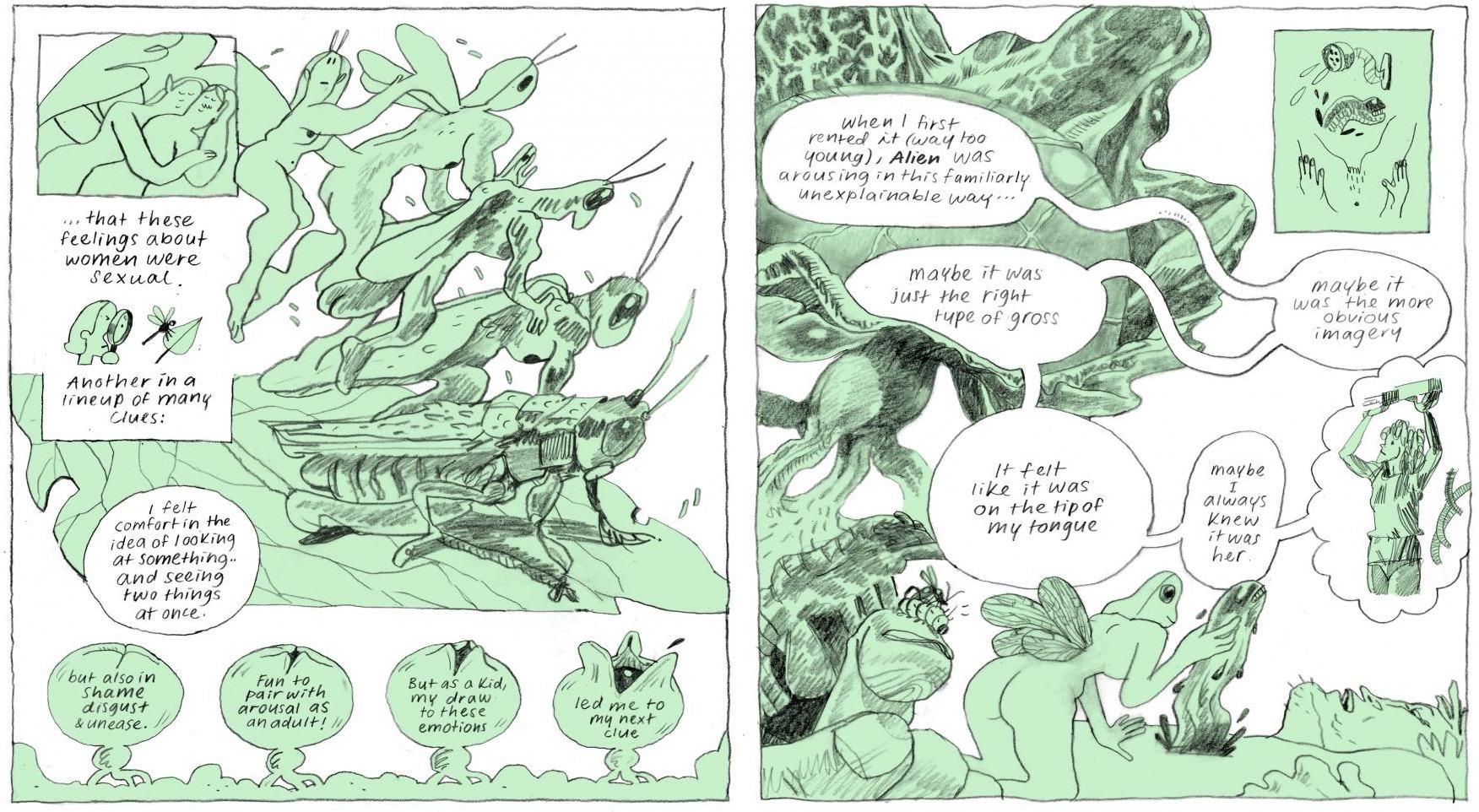 FW: Some of our pieces are very analytical. They are reflecting back on that experience, trying to give language to it, adding interpretation to what was otherwise only experience. One piece called “Minor Star” weaves between the two: a description of what is happening interwoven with how she feels about those things afterwards.

RL: Putting it into writing is an act of translation. It changes how you remember things. Interpretation is something you can’t come back from once you’ve taken a memory and boxed it a certain way.

FW: The interpretation is an echo of the awakening, a secondary awakening that can be just as powerful as the first.

MIM: Sometimes the interpretation lingers a little longer than the memory.

FW: Exactly. Once you’ve come up with the language for it, you go back to the language you’ve given the experience.

MIM: You also reference a passage from Anne Carson’s essay Eros the Bittersweet: “Eros is an issue of boundaries.” That line is taken from a chapter where Carson explains how the lover comes to realize the border between the self and another, which can never fully dissolve. In that chapter, she also writes, “The presence of want awakens in him [the lover] nostalgia for wholeness.” Is desire a way to get closer to oneself?

RL: Being in a couple is often considered the standard state, which I find odd. When I think of my friends now, being single is considered a temporary state—a state between relationships, not an existence. Eroticism doesn’t inherently involve someone else. It’s a journey you can take with yourself.

FW: Do you want to answer any of these questions?

MIM: For this question about wholeness or the self: my experience of the erotic is tied to want, but also to sensation. I am initially drawn to an experience or a person because I think it will be pleasurable in some way, and this urges me to go for it. I think that that drive to pursue an experience or a thing allows me to see that desire through and learn about myself, even if it turns out to be less pleasurable than I had imagined it. So I understand both sides of what you’re all saying, in that ultimately, my experience of desire ends with me because I have to live with me, but desire takes me through the other person, or other thing.

MIM: There is a quote from A Lover’s Discourse that I love: “Language is a skin. I rub my language against the other. It is as if I had words instead of fingers, or fingers at the tip of my words. My language trembles with desire.”

FW: He gets it. That’s the foundation for having a public writing archive.

SM: You’re imagining everything you read. [When you read,] you’re applying your own text and subtext, it’s filtered through your own desires.

FW: At the end of that piece, one of the conversants says “Twilight ruined my sexuality.” It is a really dramatic claim—what does it mean to ruin a sexuality? Sexuality is itself a path of ruination.

MIM: What are your relationships to sexting?

SM: I find desire so pathetic. I would be so embarrassed if I ever attempted to sext. I’ll maybe send a slutty picture, and be like “Do I look okay?” The image works, and I don’t even think it’s sexy to send someone a picture of my genitals. I’d rather send a picture of a nice shirt, or if I have some glitter on and I look cute in the mirror. But when I have to write a word, that’s when everything falls apart for me. The image is so effective at conveying, “Here is what I want you to see.” But when I have to describe what I want you to feel, I just can’t do it.

FW: I write really long flirtatious emails. Sexting itself is not sexy. It’s a limited range of clichés that you can pick from.

RL: I have a hard time gauging how normal it is. I have no clue how common it is to regularly sext with a partner. I imagine there would be a big discrepancy between long distance, where people are not in contact, versus people who see each other regularly.

FW: There is also something between perversion and normalcy when we’re thinking about sexting. Maybe I think of sexting as a very “normie” thing to do.

MIM: What is “normie” about it?

SM: How do we define the word “perverted” here? Is the opposite of “normie” “pervert?” That can’t be a real binary. I think milquetoast is what we’re trying to get at. I don’t know what we mean by the word “pervert” though.

FW: I don’t mean pervert like the guy who watches girls through the window. I mean it more in a psychoanalytic sense. People who are in a process of accepting how different their desire is from a mainstream inheritance of what desire “should be.”

RL: It’s such an unfixed term, too, because everybody’s definition of an acceptable form of sexuality is so different.

MIM: It is different, but I think maybe we can agree that the dominant framework is heteronormativity, missionary, reproductive sex. It is still unclear to me how the detour is more perverted.

SM: I would hope that people can come away from the stories feeling a sense of empowerment if they can relate to what they are reading, especially for disenfranchised people. I do think it’s nice to read perspectives from others who share the same race or social class as you. It’s more feedback that can be really helpful, especially if you’re still trying to find your desires. I don’t know if I can speak to the emancipatory aspect of it per se, that’s more of a conversation about from whom has desire and eroticism been withheld?

FW: The Audre Lorde question is very essential—to think about how differently desirable bodies can occupy different political positions of power. I think a lot about my journey through my own attractions to whiteness: white bodies, whiteness as a cultural fact. I’m sure that comes from my cultural upbringing, my intense desire to Westernize myself, coming out of China and trying to fit in, taking up whiteness into myself. Culture has a huge effect on who gets to own desirability in a common sense, a normal sense. Part of what we’re hoping to do a little bit in “Erotic Awakenings” is push something like—I don’t want to say the “decolonization of desire,” I don’t know if we’re that explicitly political—but offering alternative routes of desire that may not be easy to recognize when you’ve grown up with a certain set of media or culture. It’s a lifetime process.

MIM: After over a year of not really being able to touch, even those who didn’t really feel like they needed physical touch now crave it so much more. The lack of it grew the need for it.

SM: If people want to submit, they should. We are sorry we can’t pay, and Hearth also receives no operational funding.

FW: But if it’s a passion for you, if you want to do it, we have a venue for you.

RL: We’re hoping to do more in-person readings in the future. Eventually we’d like to put together some physical form of writing.

MIM: What are you hoping to receive?

SM: Have fun with it.

Maria Isabel Martinez is a writer from Toronto currently living in Montréal.

Fan Wu is an insolvent contour of a head massage performed in the guise of mere affection, is the queasy sublimation that unknots cravings of the mouth into symbols of the tongue.

Sameen Mahboubi is trying their best to survive in Tkaronto.

Rowan Lynch is in the process of foraging together a life that is more than bearable. They sometimes make art, and sometimes organize exhibitions as ¼ of Hearth. See hearthgarage.com and rowanhlynch.com.