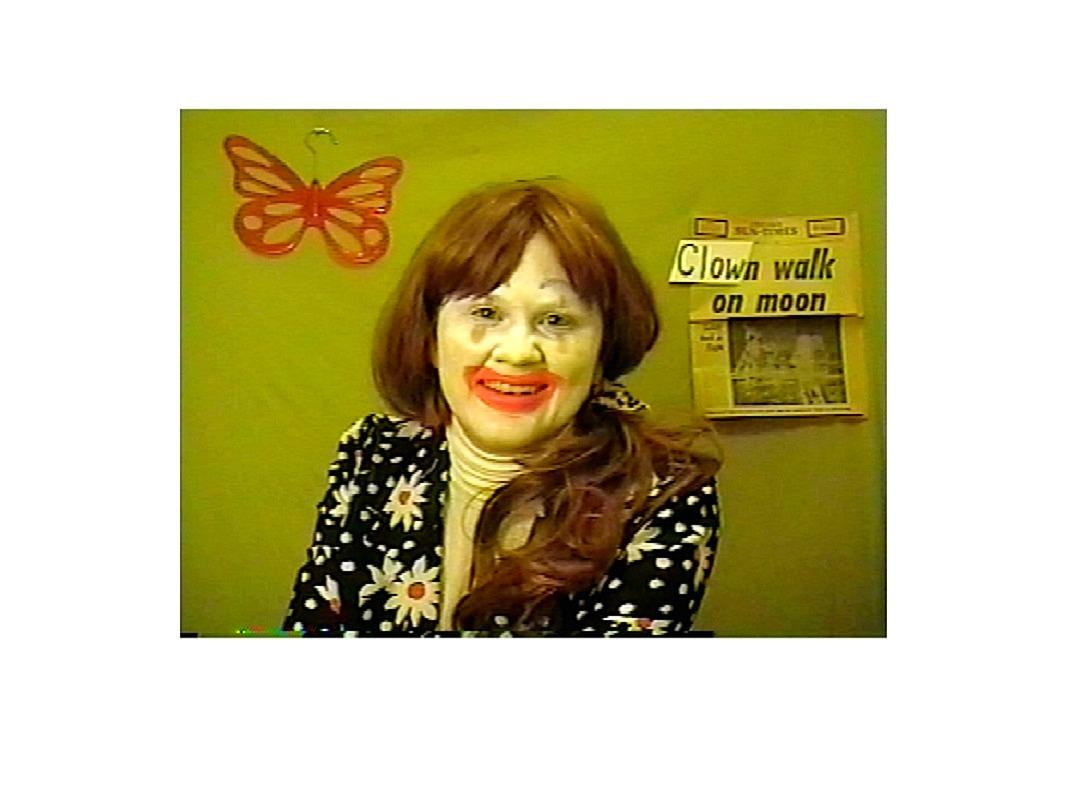 From seemingly nonsensical dadaist objects, frenetic performances, lyrically debaucherous monologues, Molly Colleen O’Connell’s oeuvre is a wonky jungle chock full of unpredictable detours. As far as interdisciplinary artists go, O’Connell is a chameleon if there ever was one. She meanders her way through comics, installations, ceramics, paintings, video performance, stand-up poetry/comedy, clowning; the list keeps going. This is all achieved in a sensibility akin to that of an inquisitive active child with a measured logic. An undergirding strength to anything she outputs is a comedy, but it will be beside the point to limit her as a comedic act. Through idiosyncratic humor and cartoonish affect lies her own vulnerability and self-analysis. Her clown characters like Dr. Cherish Love are garments for mutating through identities as much as they are sites that surface the artist’s emotional potency. In her latest theme park of roller coaster transitions, O'Connell turns to good ol’ trolling. Converging folklore trolls and those rife of the internet today, she visualizes a fantastical dream and unsettling nightmare that encapsulates the anonymity of trolls. If anything is equal parts utopic and dystopian then that could easily be O'Connell's warped, offbeat, and colourful terrains she envisions through her work. Not to mention her collage of spoken word digressions and voice switch-ups she reverberates in her stand-up performances. Play is O'Connell's wheelhouse and as much as it radiates with an oddball quality it is every bit as painstaking and sincere. In the following conversation, the Chicago-based artist and educator shares a little about her approaches for clowning, writing, trolling and more. Please read below.

my work doesn't necessarily need the specific framework of Art, but I think the conventions of Art should constantly be tested. I also enjoy performing in a comedy context, because I think comedy should be tested as well. I don't think there should be a hierarchy between the two, some of the best art is funny and some of the best comedy is profound.

What have you been curious about lately?

The subtle high and attraction of speaking or performing or just existing anonymously via technology or online platforms and the scale of trolling on the internet (from pranking your friends in middle school to influencing a political election).

Some of the work you do seems to me to slip out of the conventions of “art” so to speak. Like Dr. Cherish Love, for example, I wonder if you even need art as a framework to present what you do?

My work doesn't necessarily need the specific framework of Art, but I think the conventions of Art should constantly be tested. I also enjoy performing in a comedy context, because I think comedy should be tested as well. I don't think there should be a hierarchy between the two, some of the best art is funny and some of the best comedy is profound.

A lot of my writing for performance will start from personal experience or observations, in some cases a retelling of events, mixed with research, and buried in fiction. I think my characters have a bit of the best and worst of myself in them, but they are off the leash. I can explore obscenity or absurdity without too much consequence. This is why I initially started putting on a clown, it was a simple identity with just a few visual cues that would separate my personal voice from what I'm saying.

How did you first get introduced to clowning outside of say, pop culture? And how did it become a kind of working through?

My grandfather was a painter and made a lot of beautiful oil paintings of the circus. We had a lot of his clown paintings in my house growing up. But to also include a clown introduction within pop culture, I have a very distinct memory as a young child hiding under a chair while my older siblings watched the original Stephen King / Tim Curry It miniseries. In a scene where his face pops up maniacally, I jumped from under the chair, scaring everyone and I ran up to my room for the first of many clown nightmares. But apart from their depictions in art and pop culture, I don't think I have seen very many traditional clowns in person.

the clowns I portray typically discuss clowning as either an alien race or disease, like a radioactive spider bite. I always return to clowns because they are endlessly intriguing to me, and in a way every character I portray, even trolls or cult leaders etc, has a lot of “clown” in them.

For the Dr. Cherish Love character, I was using the language of self-help books, guided meditations, and life coaches to discuss clowning as a meditative practice. And in some clown literature/how-to guides, they do discuss clowning as a state of being rather than a costume. Clowns are supposed to be sexless, ageless, have no gender, race or religion, in other words they have no concrete identity. Their identity is just a clown, which as a writer/performer is fun to mess with. The clowns I portray typically discuss clowning as either an alien race or disease, like a radioactive spider bite. I always return to clowns because they are endlessly intriguing to me, and in a way, every character I portray, even trolls or cult leaders, etc, has a lot of “clown” in them.

I think its an interesting perspective you have on clowning as a state of being as opposed to costuming, what about trolling? Do you approach it in that way?

Yes, when I write any monologue I try to inhabit the character and write from that mindset. The writing takes the most preparation and the character is slowly being formed during that process, the costume comes last and is almost an afterthought. It's a way for the audience to be visually engaged and in on the joke, and to believe the performance a bit more.

I am interested in characters that feel specific but also explore an archetype. Within the troll body of work, I use the term troll loosely as to allow connections between the Norse mythological creatures and anonymous figures brooding behind computer screens and the pop-cultural doll/franchise. I am also interested in the collapse of identity between someone messaging a peer anonymously, and Russian trolls hacking the election, both acts loosely being dubbed "trolling."

You seem to be purposefully misleading by being a "troller" but what is the response you are after in eliciting one’s attention?

The troll meeting performance/text is all about paranoid logic that develops in a fringe community, and how language can be used to manipulate and indoctrinate an audience. I appropriated some of the phrasing and language used by conspiracy theorists to their audience, and the belief of a lizard race controlling influential celebrities/politicians is based on a real conspiracy theory, bred mostly on the internet. A lot of theories of this kind are hard to trace to their origin. In my troll character, I am spewing and conflating these theories with potential facts mixed with paranoid advice. This can be a dangerous act in the current U.S. political climate, where fact and fiction are deliberately misused and confused, but I aim to use such absurd logic that it critiques and satirizes the misuse of information. I am also making an invisible menace visible, so as to reckon with it physically.

Do you think we are slowing becoming desensitized to trolling as we spend more and more time on our screens and are growing cognizant of it? Like click-baiters

There will always be deceptive people and gullible people. I think trolls do get more creative in their lures, and much more specific. The more information about yourself you allow on the internet, the more they have to play within their toolbox. I used to get vague emails asking for bank information in order to send money to a prince in another country, now I get vague emails asking for bank information because they want to buy a piece of art. But now, corporations are using clickbait or catfish techniques to pop-up ads for a pair of sneakers that they traced your search for on a separate device or a coupon you scanned in a competitor's store. Capitalism always finds a way to learn from, legalize, and improve upon "criminal" creativity.

There's also an antagonistic politic to using trolling as a device in your work, how do you navigate the abusive and indefensible activities trolling is attached to?

I am interested in the slippery slope of trolling. I don't condone vicious anonymous acts, but in 5th grade when I first logged onto AOL 1.0 I immediately posing as other people or lied about myself in chat rooms. It was my first unfiltered impulse. I also recall years of fake screen names to learn secrets about friends, crushes, and enemies throughout middle and high school. I think everyone enjoys the private window now and again but were in the grey area of anonymity does your fabricated identity sour, become an aggressive release, or a malicious space?

Do you think the internet/digital technology complicates our held ideas of truth, what is possible and what is unthinkable? To what end do you think it affects our engagement with it?

Of course, it does. For me personally, it has made my world a little more paranoid. But I think that may have to do with my age, I had a childhood pre-home internet, but a teendom that was peppered with the early trials of social media. Now people begin cultivating and documenting an online identity very young, and I think that breeds a sincerity and trust in online identity, even if your avatar is a performance of your best self.

Words and language are very much a part of your work if not as prevalent as the visual. From your comics to your performances, words seem to come fairly fluidly to you, and it's amazing to see you recite them in different voice portrayals in your performances. You use language to do so many things in your work which sometimes becomes latent as the visual takes the fore but it's present nevertheless. Anyways, what's your relationship to language when it comes to your work, has writing always come easy for you? Or has it always been a necessity for what you do?

In the every day, words do not come easily to me, I fumble whenever I try to explain myself and I frequently lose the "correct" names for things. These traits end up being useful though in writing in the mindset of absurdity. I thoroughly enjoy language as a tool, I love learning a new word, I love the way people talk when they're feeling any kind of extreme, I like to collect overheard phrases. Writing a monologue is difficult for me, I work best under a lot of pressure, which produces a lot of anxiety but most of the characters I write embody a lot of anxiety and it's hard to fake that. I try to write as fast as I think, like catching a bullet, which calls for a lot of editing. It became necessary to write because my work was always much more interesting in my head when I would explain the story or idea that became the bigger point of interest for people.