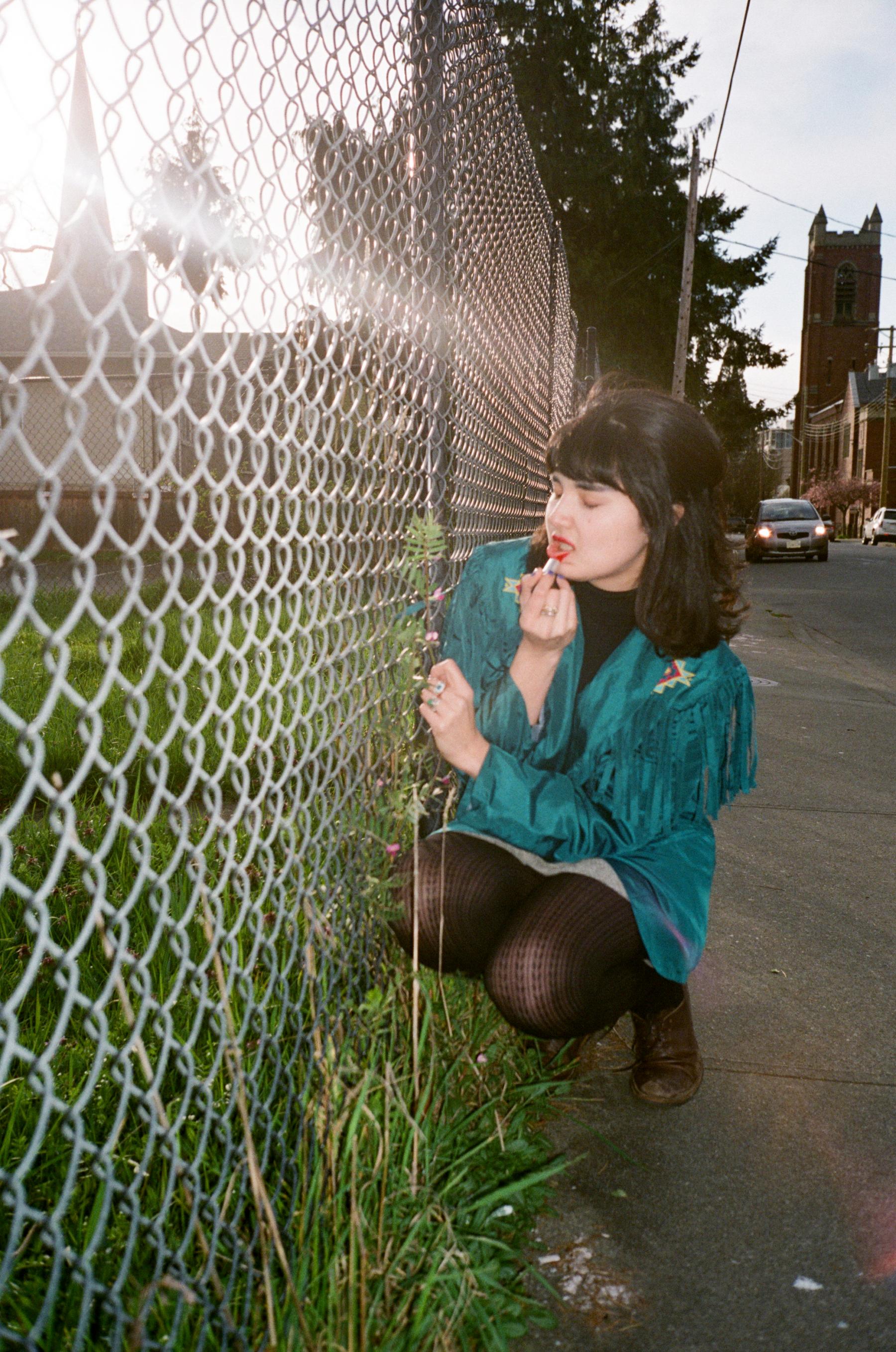 Chandra Melting Tallow is an artist whose output can be described as poly-directional. And this has come to include their sound work under the moniker Mourning Coup. A project which progressed out of their former work in conceptual performance art. Their work has been presented in Istanbul, Toronto, Calgary, and Montreal among other places. The Vancouver based, Blackfoot and mixed ancestry from Siksika Nation has been steadily creating work whenever able amid disabilities beyond their control.

The visceral reverb-laden incantation wails that bookend Tallow's full-length debut is the result of five years of crafting and chipping away at Mourning Coup's Baby Blue album. An eeriness and propulsive energy are rather discernible over structure through the course of the album where at times the vocals are seemingly wordless and sound like longing cries. Listening to the whole thing, you are carried through this conjured unknown world that feels vast with little to grasp onto but secure all at once.

Tallow is currently at work on newer work--slowly but surely. In the meantime, we were lucky to get a little bit of time with Tallow and they answered a few questions for us. Check them out below.

at the end of the day, I choose to ignore an overemphasis on the value of being a prolific artist because it's beyond my capacity and I don't want to feel bad about myself. I'm always fighting against being overwhelmed by injustice, bitterness, and my physical limitations.

Can you share an early memory of making something you can look back on as coming from a creative inclination?

I used to draw pictures and then get my daycare workers to staple them together and have them write down a story on my behalf because I couldn't read or write yet.

That's awesome. OK, can you remember an early memory of being curious or obsessed with something, an idea, person, place or anything? And what did you do to fulfill the curiosity?

I was pretty obsessed with Madonna from years old until about 8. I had several of her albums on cassette and my favorites were the Immaculate Collection and True Blue. I watched A League of Their Own and Dick Tracey repeatedly and I drew a mole above my lip until I got teased for it, which is too bad because that's so sick. I'd also give performances of her songs in my living room for my grandmother and mom. By the time I hit 9 or 10 I was pretty over Madonna. I have neutral feelings towards her now and I don't really ever listen to her music but I can't deny she was my childhood hero for a hot minute.

Why do you think it matters for you to be creating in any form that you choose to create and sharing it with others?

Because it makes people feel good, I know this because they told me.

Can you recall an early instance of you felt vulnerable musically/creatively and decide shared that...and what that felt like?

When I was 17/18 I self-identified as a poet and I was probably more prolific than I've ever been in my life. My mom was very active in the Native art scene in Calgary so through her, I got opportunities to read my poetry at different festivals and events. It was uncomfortable and exciting at the same time. I started writing poetry as a way to write down things I wanted to remain private by using cryptic language. I thought it would be cool to be on a stage but it was mostly terrifying. After this went on for about a year I stopped writing poetry altogether. I only picked it up again in the past couple of years very sporadically.

Ok Lastly, how do you think your economic and/or social class affects or has affected your creative output?

My experiences related to class and economic position are directly tied in with living with a disability (ankylosing spondylitis) and the impact of inter-generational trauma resulting from colonialism and racism on my body, my thoughts, my emotional well being and my loved ones. Every day I'm presented with obstacles to make work or even just carry out simple tasks necessary to daily life like getting dressed or eating or at times even walking more than a few blocks. I can't tour the way my friends can, I can't sit and record for long hours, playing a show can take a week to recuperate from. I'm just one of thousands unable to enter the workforce because of a disability living a 43% below the poverty line on disability. So many lives are bureaucratic and political whether we like it or not and it's stemmed from the attitude that some lives are more valuable than others. I often hear these harmful perceptions ascribed to capitalism but it's also necessary to keep in mind that these attitudes predate our present society and are Eurocentric.

It would be difficult to fully gauge the myriad of ways these contributing factors affect my output and I don't even want to fully go there. I take great pains to avoid being discouraged because my survival depends on it. I would say however that I think you can create a lot with very little. Parts of my album were created during periods of time when I was couch surfing or completely broke. A lot of people successful in the arts and music industry come from positions of privilege but that doesn't mean they are the most talented. I like this quote by Stephen Jay Gould because it articulated the way I've felt for a long time:

"I am, somehow, less interested in the weight and convolutions of Einstein’s brain than in the near certainty that people of equal talent have lived and died in cotton fields and sweatshops."

To attribute this idea specifically to him would defeat the spirit of the concept, I'm sure lots of people have felt this way throughout history but I appreciate that he articulated it in a succinct way. It can also apply to any creative field and marginalized people everywhere. At the end of the day, I choose to ignore an overemphasis on the value of being a prolific artist because it's beyond my capacity and I don't want to feel bad about myself. I'm always fighting against being overwhelmed by injustice, bitterness and my physical limitations. Perseverance at a pace that is kind is the ship that carries me through difficulties and allows me to make space for beauty in my life and hopefully the lives of my loved ones and whoever chooses to be my audience. That being said I am so grateful for the support and privileges that I have that others in positions similar to mine or worse don't have and those stories often go unnoticed or unheard because this society doesn't value them.